What it means to be “Worthy of Imitation”

At Waldorf Schools there is often a lot of talk about early childhood teachers needing to be “worthy of imitation”. Of course this concept can also be extended to parents. But what does it mean to be worthy of imitation? How can we live, breathe and model warmth, love, dignity, wonder, respect and reverence for our children on a daily basis? Jerilyn Burke explores this topic further.

The Child as a Sensory Being

As a newborn, the child experiences their body outside of the womb for the very first time. Their eyes see light and dark. Their ears are the most discerning they will ever be in their life. Their skin is thin and sensitive. They cannot regulate their body temperature. And when they drink warm, nourishing milk, you can witness their hands and toes curling up with satisfaction. They take everything into their entire being. They cannot help it. They were made that way. Young Children are what Rudolf Steiner, the founder of Waldorf Education and Anthroposophy, describes as “one great sense organ.” They arrive vulnerable to all that they are exposed to and that is the reason why they need our protection. We can do this by being as thoughtful as we can to what they see – making sure the lights are dim and minimizing jarring stimulation. We can be conscientious to what they hear – making sure sounds are pleasant. And with their skin, we can make sure their clothes are soft, breathable, and allows for movement. We are responsible for keeping them safe, comfortable, and warm and they trust us unconditionally.

Most of us intuitively know to do these things when it comes to newborns. Can’t you just see your sweet baby all bundled up and warm in your arms? And now they are so big! However, it is important to continue protecting with awareness throughout the entire span of early childhood. Because although they are bigger, more capable, and hardier, children up to the time when they start growing new teeth are extremely vulnerable and are still taking everything in as “one great sense organ.” They are finding their way in the world and are learning the norms, the unspoken rules, of their environment. They are constantly learning, and imitation is the innate way for them to do so.

Indeed, according to Steiner as well as contemporary early childhood experts, the first seven years of life is “the stage of imitation” and I experience this every day at home with my own children. Just the other day I was watching all three of them at the sprinkler. My oldest son would jump, then my youngest. The oldest would do a spin, then my youngest. My oldest son would do something daring, then my youngest. In the classroom, I see imitation happening every day. The children light their pretend candle exactly as I do at meal times. Children take in their environment and will imitate what they see, good or bad, as they have no filters. They are perfect mimics and they were made to learn that way. The children are drinking everything in and do not have the ability to discern whether or not they should or should not be copying someone.

Parents come to me with stories like this all the time, sometimes exclaiming after their child says or does something a little unsavory, “I don’t know where he picked that up!” We can’t always control who or what is in the children’s environment and most of the time we must make the best of any given situation. But we can do our best to be aware of our own selves. It is so important for adults to be worthy of imitation when they are in the presence of young children. You know the saying “do what I say, not as I do?” Well, that does not work at all for the young child. Truly, the best way to teach young children is to do. To show them how to be by being present, gracious, and deliberate.

While visiting a Waldorf kindergarten in Brooklyn, I saw the children doing this so beautifully as they sat by their teacher. A couple of children were sitting next to their teacher chopping vegetables. With calm deliberate movements of the knife, the teacher and children were immersed in their task together. Rudolf Steiner states that “everything that is done in their [a child’s’] presence is transformed in their childish organism into spirit, soul, and body.” Talk about pressure! Does the young child truly assimilate everything that is done in their presence into their entire being?! If we believe that it is so and did our best to create an environment that is nourishing to the senses and saw to it that we ourselves are worthy of imitation, what a gift it would be for young children.

A Kindergarten Classroom that supports the Young Child

The Waldorf Kindergarten teacher strives to be thoughtful with gestures and speech. She plans the day to include plenty of purposeful activities that the children can imitate, either in the moment or later in free play. She makes sure that the children have the time and space for movement, awakening the capacity to imitate. This is how we teach in Waldorf Schools, and it is the constructive way for children to learn. Explaining, directing, and questions are quite overwhelming for young children. Waldorf teachers have learned that it is so much better to let the children be led by warm gestures and movement that they can imitate.

The Power of Limiting Media

With these thoughts in mind, it is also another reason why Waldorf schools and leading experts in child development encourage parents to limit media. The most apparent reason is that it is detrimental to children’s physical, speech, and brain development. However, there’s more to it in regards to what I have been mentioning. Children are taking in the entirety of what they are exposed to without having the capability of being able to differentiate between good or bad. They will imitate both.

In fact, a study conducted by Dr. Douglas Gentile showed that even after watching “educational” shows such as PBS’s Arthur, young children were observed to be more aggressive afterward. Gentile states, “even though educational shows like Arthur have pro-education and pro-social goals, the conflict between characters is often depicted with characters being unkind to each other or using relational aggressive tactics with each other. Preschool children really don’t understand the moral of the story because this requires that they understand how all the parts of the show fit together. You need pretty complicated cognitive skills and memory skills to be able to do that, which are still developing in young children.” The goal of these “educational” shows is to teach social skills such as empathy and kindness but it doesn’t work because the majority of what they are seeing are anti-social interactions. During the majority of the show, characters are being hurtful to each other. The show culminates during the last five minutes when the characters finally demonstrate pro-social behavior. The young child will imitate it all.

Furthermore, the brain (and this goes for adults too) is not able to differentiate whether or not an action happened in real life or pretend, the physiology is the same. Therefore if a child experiences a stressful situation, for instance, a cartoon character being mean to another character, the human brain takes it in as though it were real. And the innately sympathetic young child takes it in even deeper because their capacity for reason has not yet developed. Think back to a time when you witnessed someone being mean to another person. For me, those situations resulted in stress. Imagine what it does to a young child who is still making sense of this world?

Need Proof? Observe your own Children

Take a moment and simply observe your young child at play. Watch how they imitate their world. Steiner was really ahead of the game when he meticulously described (in his turn of the century way) what he understood of young children. Now, there is current research that supports these ideas. Along with the media studies mentioned above, scientists exploring mirror neurons have begun to dissect these insights further. Wikipedia explains in simple terms that “a mirror neuron is a neuron that fires both when an animal acts and when the animal observes the same action performed by another. Thus, the neuron mirrors the behavior of the other, as though the observer were itself acting. So even if a child is not outwardly imitating you, inwardly, they are.

It is a fortunate child who is surrounded by people worthy of imitation and an environment that nourishes their whole being. There is no such thing as a perfect parent or teacher so just be a real one. Remember that it is your striving that really matters. You are amazing and their love and admiration for you is immense.

“It May Be Educational, but What Is That TV Show Really Teaching
Preschooler?” RSS, 18 Feb. 2013, 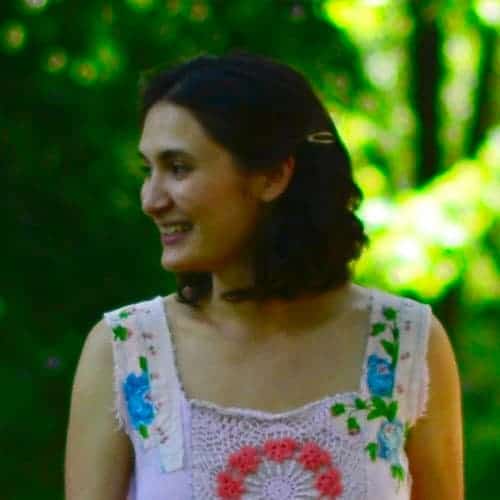 Teacher at Waldorf School of Philadelphia

Jerilyn Burke is a Waldorf Kindergarten Teacher in Philadelphia, Pennsylvania. As a mother of three, she recognizes the challenges of the modern family and feels a call to support others navigating the journey of parenthood. As an early childhood educator, Jerilyn wishes to meet the needs of this generation by providing an education that nurtures the whole human being. After receiving her bachelor's degree in Interdisciplinary Humanities, she traveled widely. She completed her LifeWays training in 2015 and is currently enrolled in the Early Childhood Professional Development Training at the Rudolf Steiner Centre Toronto. Her professional work with children encompasses over 15 years.